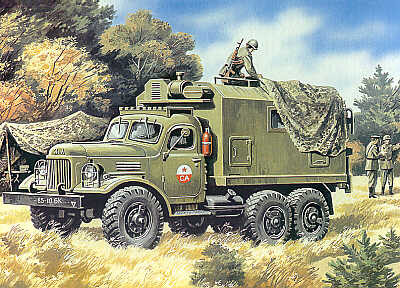 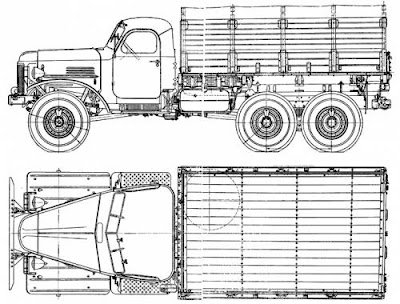 The Soviet Union was a pretty forward thinking place in regard to tanks and SP guns, but woefully backward in the area of trucks and transportation in general. When they received the first series of US trucks under Lend Lease in 1942, they were amazed at both the sophistication of American trucks and their reliability and ruggedness. Their own standard medium truck, the ZIS-5, was a 4 x 2 design with brakes only on the rear wheels and noted for only limited off-road capability. The GMC CCKW and Studebaker US6 with their 6 x 6 configurations and reliable drivelines and brakes were a shock.

After the war, the Soviet truck industry built its own version of the two American trucks as the ZIS-151. This truck remained in production from 1948 to 1957 (changing names from ZIS - "Stalin" Factory - to ZIL - "Likhachev" Factory - after 1953) when the ZIL-157 took its place. This truck was an improved version, with its main distinction being the large, single tires in place of the smaller, narrower ones that were paired on the rear drive axles of the ZIL-151. These also had adjustable tire pressure to both overcome flats as well as increase flotation in soft terrain. Later, an automatic control was provided that did this automatically. The ZIL-157 was in production from 1958 to 1961; the improved K model from 1961 to 1964, various other improved models later taking its place. The last variant, the ZIL-157KD, was in production from 1976 to 1982. Most of these were export models (the USSR having changed over to the ZIL-131 in the meantime.)

The ZIL-157 was basically a 3 metric ton cargo truck meaning it had a cross-country cargo rating of 3,000 kilograms or about 6,615 lbs. On paved roads this could surge to as much as 7,500 kilograms plus a trailer, but for the most part the vehicle was not strained that heavily. It had a crew of two and could carry a normal load of 12-16 soldiers in the rear cargo body thanks to folding seats. The vehicle was provided with a self-recovery winch.

Numerous variants were built, the most common being the so-called "BBV" (Box Body Vehicle) versions and the ZIL-157V model tractor for use with a semi trailer.

DESCRIPTION:
The ZIL-157 (6 x 6) truck replaced the ZIL-151 (6 x 6) truck in production from 1958, and in 1961 the improved ZIL-157K entered production, to be replaced in 1966 by the more powerful ZIL-131 (6 x 6) 3,500 kg truck. In appearance the ZIL-157 is very similar to the ZIL-151 but has a slightly different cab (also fitted to late production ZIL-151s), and single instead of dual rear wheels.
The layout of the vehicle is conventional, with the engine at the front, two-door fully enclosed cab in the centre, and the cargo area at the rear, which consists of a wooden platform with sides, bench seats down each side which can be folded up when the vehicle I carrying cargo, and a drop tailgate. If required, the vehicle can be fitted with bows and a tarpaulin cover. Standard equipment includes a cab heater, an engine preheater and many vehicles also have a winch.

Posted by Mitch Williamson at 1:08 PM

Email ThisBlogThis!Share to TwitterShare to FacebookShare to Pinterest
Labels: Armaments 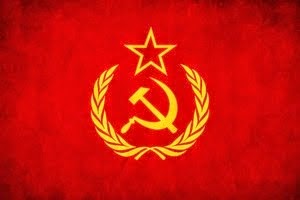